A downloadable game for Windows

DISCLAIMER: EMPTY HEAD contains violent and bloody elements. This game is the result of the author's creation and imagination.

I've been inspired from other indie horror games such as The Cat Lady and Downfall (Remigiusz Michalski) and from my love for the psychological horror genre. The plot is entirely made up by me.

Plot:
In the small hamlet of Elkedor lives the Baker family, isolated and almost ''inexistent'' for the townsfolk. Arold, family man and lawyer with no fame, enters in a difficult time of his life between alcoholism and a falling apart marriage. His days began getting filled by drinking more and more, while his wife and their two children, Sarah and Thomas, started to get detached and cold. One night the two went missing. Desperate at the thought of losing them he decided to investigate until, thanks to clues found in the house, succeeds in finding a hidden passage. Lies, compulsions, and hatred are the summary of what underlies in the ambitious Baker family.

Arold Baker: Laura's husband and father of Sarah and Thomas. Brown hair, mustache and beard, thin, brown eyes. Our protagonist. A realist and friendly man, but sometimes he may seem rude.

Laura Baker: Arold's wife and mother of Sarah and Thomas. Short black hair, thin, blue eyes. An insecure and weak woman, but she would do anything for her family. She can't stand lots of things, including her husband's drinking problems.

Sarah Baker: Arold and Laura's daughter, young sister of Thomas. Black hair tied up in two small ribbons, thin, green eyes. Sarah has her head in the clouds half the time and shows no emotion whatsoever. Considered ''The mute girl'' in the hamlet. Her favourite plush is a teddy bear called ''Leo''.

Thomas Baker: Arold and Laura's son, big brother of Sarah. Brown hair, thin, green eyes. Thomas has a big passion for insects and his dream is to study entomology. He's cheerful and a little careless, his dad hopes he will be a successful lawyer.

Hanna Meekins: Senior citizen of Elkedor, she lost her husband due to an incurable disease. She isn't quite sympathetic with the Baker family.

Part 3 and all endings:

I must say, I'm very intrigued to see where this goes. Definitely revisiting it soon.

Reply
KuroOnist30 days ago
I found this game on  RPG Maker horror games amino  while looking for RPG  game makers to join my art and gaming amino,  since they all died before I got into making games myself >_<
Reply
hixtle31 days ago

This.. It's a masterpiece! I loved it.

i'm starting to make games and i want to start by rpg maker games(i have rpg maker mv), i'm playing some games to learn how they work,i'm discovering treasures like yours.

Thank you! It means a lot to me, I can't wait to play your games as well

Thanks anyway for trying it

I enjoyed the game and the story was well structured. The horror sensation feels a bit, but my suggestion should be to add more sound effects. Music also needs to be added to moments of horror or sadness.

I made the gameplay on Youtube, you can watch it if you want.

Hi! Thanks for the video and for the suggestions, I appreciate them ^^

made this a series on the channel, probley one of the best rpg horror's in a minute i've seen. Great work!

i loved this game <3

I love this game, It is wonderful.

Yo the plot of this game is amazing!

I know i shouldn't be saying this, but

My dad has been acting insane since im 11 years old, he screams with me and hits everything he sees with his own hands, and i have a trauma because of it.

And no, i dont hate him. His life has been a hell in a long time, his ex-wife was a crazy woman who tortured his child, his 13 years old daughter has depression, anxiety and ocd, has bad notes at school and suffered bullying last year (I'm okay at school now, thank god).

He his way too stressed because of his daughter, so he screams everytime to feel a bit better.

And now he has to take care of his ex-wife's son, who is 20 years old, which needs to recover from a 8 year depression.

I realized my dad is suffering so much, so everytime i make him worry about me, i cut myself as a punishment.

I know this is wrong and it makes him worry even more about me, but i feel like i DESERVE it.

I'm sorry for venting though. Arold made me remind of the problems I've been hiding from myself. Thanks for making this game, now I know I  don't have to hide my problems, but  solve them and continue my  happy life.

this game looks awesome i wish it was mac compatible TT

me and my boyfriend played this together and we had tons of fun :) very nice game! and i'd hope to see more games from you in the future!

Thank you guys! I really appreciate it :)

SING US A SONG YOUR THE SHAWDOWMAN!

Thanks for the video!

Of course my man! You made something solid here. :{)

Yikes, I'm having trouble with the part with all the mirrors. I'm mega stuck. But!! other than that, it is a really good game, it has such a great atmosphere, it really made me sit there and just stare at the screen in awe.

If you examine all the mirrors, you'll see that there are some symbols that are connected with numbers . You have to use them to open the door :3. Let me know if you need further help~

This game was amazing! it had a great plot, great music, and very emotional. It was a great RPG game!

Thank you so much!

Enjoyed it a lot, pretty long for an rpgmaker horror game as well (2.5 hours in my case to 100% it and see all the endings). Hoping you'll make more games like this in the future because I'll always enjoy playing horror rpgmaker games.

Really enjoyed it! Loved the characters and the music and the feels

Can't wait to see what else you make

This was so much fun!! I got all the endings! Thank you for spending your time to make this incredible game for us to play~ :D

I'm glad you guys liked it!

I couldn't get the key to work in the room with the dead cat, after meeting white fox.

You have to use the first key with the locker ^^

Whoops, I completely forgot about that.

Don't worry! If you get stuck again, here's the full walkthrough :3

Hey, I really liked the idea even though the story telling confused me at times. I did a little video on it:

Thanks for the video! It's meant to be like that at the beginning :P

Did you make this in VX Ace?

You think it'll be possible for me to help bring it over to RPG Maker MV?

Thanks for the offer, but there's no need for that ^^

I really liked this game. Great job!  I have a question: Is the music original? I am wondering if I should fight the copyright claims on my video. Thanks!

Thank you! The music I used was made by my composer and some of them were also free resource. You don't have to worry about the copyright :)

Can i post my gameplay for this game? :) on my utube channel?

This is an interesting game so far.  Well done.

Here's the second video and I really like how you made use of the empty space outside of the play area to add in a bit more of a creep factor in.

Here's the last video for the game. I wish there was a bit more of a horror effect in the game towards the end. But that said, it's a good game.

I can understand, however I tried to focus more on the story ^^

Man I loved that too

this is very beautiful ♥

Thank you!! You are so kind

You are very welcome kind sir or ma'm :)

Thanks a lot for your gameplay! ♥ 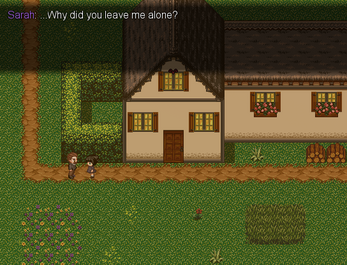 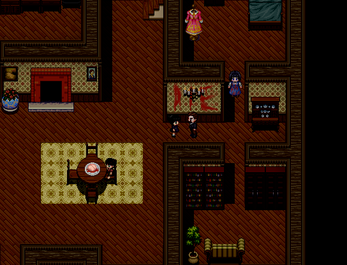 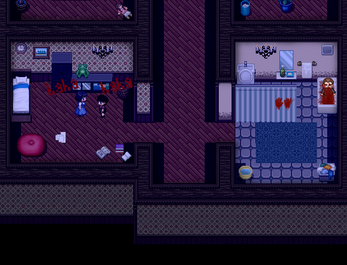